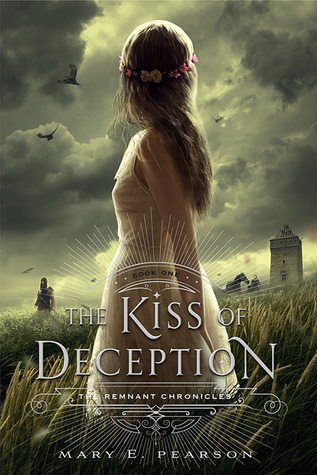 Add it to your TBR: Goodreads, Skoob

The Kiss of Deception is the story of Lia, Princess of the Kingdom of Morrighan. She is to marry a prince she never met from a neighbor country, and is fiercely against it. But her parents are willing to give their daughter away without as much as allowing her an opinion, so she decides to take matters into her own hands – and runs away on her wedding day.

As the news of her escape reach other kingdoms, the Prince she was supposed to marry is intrigued about her and decides to find her and satiate his curiosity – at the same time, an assassin is out to find her as well, and both arrive together in the tavern where she now works under disguise. Not knowing who either of these new strangers are, Lia finds herself falling in love with one of them…

I debated giving this book 3 stars for a long time. It’s got everything to make it a meh or even bad book, and so many tropes I could write an entire post just about them. There was just so much I wondered a few times if the author was trying to win some sort of Guinness World Record for book with most clichés. So, coldly thinking, I wanted to give it 3 stars. But I must confess: this book was so entertaining I could hardly put it down.

The characters are mostly flat, with predictable personalities. Apart from Lia, who was the most complex character of the book, although not quite “complex” as much as “not entirely flat”, everyone else just felt like I had seen those exact characters twenty times before. The world development also felt generic, as well as most of the plot. But!

The writing was done really well, it’s quite gripping and I was never bored while reading. The story sucks you right in, and you never feel like it’s being narrated to you, but (maybe because of the 1st person POV), it feels like seeing the story unfold through the characters’ eyes. I really enjoyed the friendship of the women working in the tavern, and how they supported and respected each other. It was nice to see that in a book for a change. My favorite part is the last third, when Lia finally becomes a little less selfish and develops into a more interesting and dignified character. There was far more adventure, magic and less swooning than in the rest of the book. It ends in a very high note – I have high hopes for the rest of the series.

If you know what you’re in for, this book is great: it’s mainly a romance, with some action and adventure, and a fantasy background. It’s basically a chick lit, don’t be mistaken about that and don’t expect high fantasy, or bad-ass super powerful Princess battling with magic to save her people – it seems to me that book #2 might have Lia as a more powerful character, but for book #1 she was basically waiting tables a lot and wondering about kissing boys, and not so much wondering about how she ruined a political alliance with the other Kingdom. It was such a good guilty pleasure reading!

Also, during the first half of the book the author tries to keep you guessing about who’s the assassin and who is the prince, but it seemed quite obvious to me. The idea was interesting, but the characters were too cliché to make it a difficult task to guess who is who.

There are many things that don’t completely make sense in this book: why did Lia think the peace between Kingdoms was less important than marrying the love of your life, the Prince tracking her down just for his own curiosity, how the Prince and the Assassin arrived together where Lia worked despite the Assassin having to cover way more ground to get there, etc…

But I loved it anyways and I am itching to read the next ones.

Verdict: I recommend this book if you’re in for some guilty-pleasure style romance set in fantasy. If you prefer high fantasy and dislike romance books, stay away from this one.

5 thoughts on “Review: The Kiss of Deception (The Remnant Chronicles #1), by Mary E. Pearson”