As some of you know from my Twitter, I was at the Frankfurt Book Fair this weekend, and I’m here now to tell you guys how it went! My first surprise was at how big the event was! You see in the picture below the building, which is far away because I only thought of taking a picture of it as I was leaving and I was too lazy to go back, also I like trees during fall, so.

The guest country this year was France! Which means a lot of French authors came for panels and so on. I have to say I kept mostly to the international books areas, because I really cannot read German that well and I didn’t want to be tempted by books I couldn’t read. My next surprise was then to realize that the fair was mostly for publishing houses to display the books, and not necessarily focused on selling them to readers! How odd. My boyfriend dutifully explained that those fairs seem to be more with the intent of making business contacts than making little bookworm hearts happy. So on Saturday we were basically drooling over books. 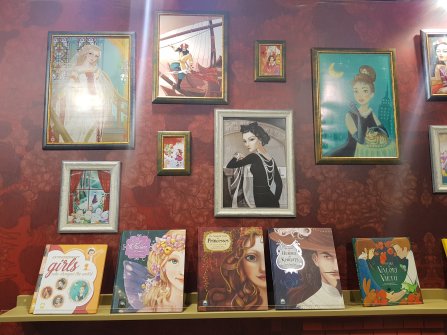 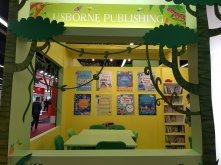 (how cute are those stands?)

I don’t think I had ever seen so many pretty books in my life. I was quite enchanted, and it was probably best that on Saturday they weren’t really selling, otherwise I’d have bought SO MANY. I checked out Bonnier’s stand for quite a while, they had really cool books. I loved Night Shift and kind of regret not buying it. I will buy it next time I see it. It’s a gorgeous book about depression, where dragons represent it. Very touching. I started reading Frogkisser, but didn’t like it, and Spellslinger seemed like an interesting book but I felt like I’d read many similar ones… anyone read those? 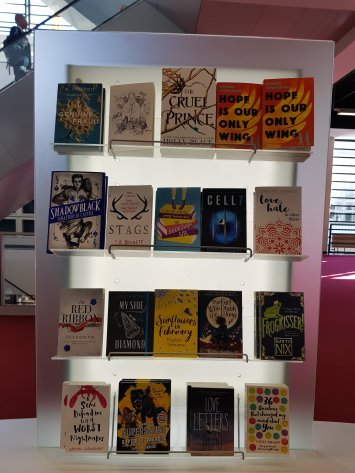 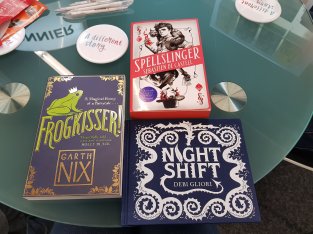 I did end up buying The Girl Who Drank The Moon, which has such lovely cover art, and I have heard great things about. I haven’t read middle grade books in a while and thought this sounded so magical and cute!

The cosplayers were pretty amazing, you can look up the hashtag #fbm17 in Instagram to see some! I was a bit shy photographing people and I wasn’t sure I could just put up in a blog pictures of people, so decided against it. But there are lots of cool photos under the hashtag!

There was a LOT of stuff to see and my phone marked 25,000 steps on Saturday and 15,000 on Sunday… so yeah, it was pretty exhausting, especially for sedentary me! They did have a nice place for hanging out and eating outside and since the weather was gorgeous, we did that for quite some time. I took a nap. #dignified

(Picture taken a few minutes before I fell asleep. Yes, I brought A Court of Wings and Ruin with me, a 700-page book. To a book fair. Because I was afraid I’d run out of reading material.)

On Sunday, a lot of the publishing houses had packed up and left, including the one with the new Matt Haig’s books, which are middle grade Christmas stories and I wanted them so much!! But a lot of the ones that were there were selling books, which was great! I went to the Penguin Random UK stand and… oh my god. Bookworms can be very vicious when it comes to getting half-priced books! I was a scared little rabbit and tried for a few minutes, but didn’t see any books that interested me and left. I got hit by someone’s purse in the process.

Leaving the scary people behind, I had a very nice time checking out books from other stands, and the lovely person at the Quirk stand gave me a copy of My Best Friend’s Exorcism and it’s no exaggeration to say I was squeaking with happiness! Looking so much forward to reading it! Thank you, Quirk Books!

I also bought Lumberjanes volume 6, which looks so absolutely cool and I’ve been seeing around for a while! Finally, I stepped by a stand whose name I unfortunately forgot, and picked up the whole series of Fall of the Gas-Lit Empire, a steampunk mystery. I haven’t read much steampunk and it seemed like a great opportunity to read something I hadn’t heard of before! Also I got the third book for free, so there’s that.

After the fair, we went to the second-hand book fair happening RIGHT IN FRONT OF THE OFFICIAL BOOK FAIR. Hahaha people sure see and opportunity and take it! Was a rather enjoyable thing! 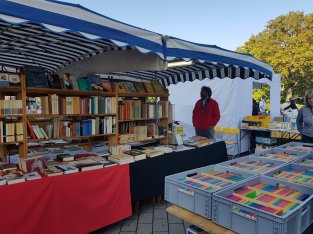 (How lovely are those miniature books on the right side??)

I ended up getting Sphere by Michael Crichton, which was 2 Euros! Ahh I love a good book bargain. So yeah, I didn’t buy too many books, but I am quite content with the ones I got. Also I had a backpack with me and had to carry that around full of books, so well. Probably got too many already. Ouch my shoulders.

I’m definitely going to more book fairs, I really enjoyed this one, although it was rather different than what I expected! But it was quite fun and I had a very good time!