Hello bookworms!
Ha, this post is and isn’t about books. How mischievous. For this one, my very good friend Clio @ Clio’s Boardgames and I came together with a few boardgames with bookish themes as ideas for what to give to people for Christmas or, most likely, for yourself. Games are great for getting people together and, contrary to popular belief, boardgames don’t ALWAYS have to end up like Monopoly, with broken families and friends turned enemies, as well as a terrible idea of how going to jail works. No, sir! Games can be actually fun, and to me it’s twice the fun if the game also has a fun theme and you spend the first 20min deciding who you’re going to play because you just wanna be all of them. 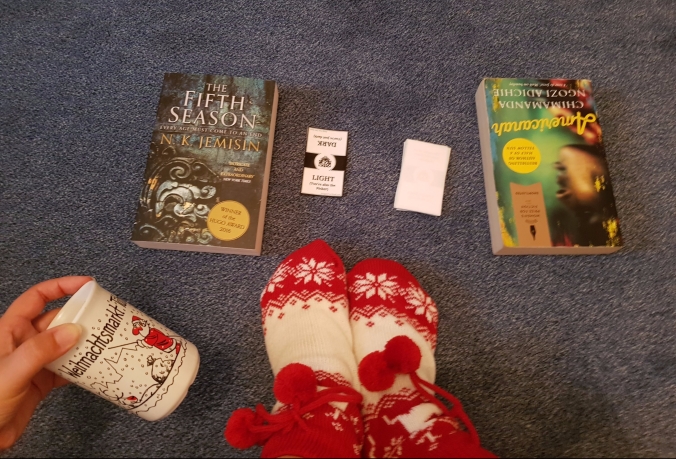 Joking apart, boardgaming has really come far the past few years, with the introduction of a lot of games where you play in a collaborative way instead of against each other for example, if you and your siblings simply are too competitive and will turn Christmas into Apocalypse-mas.

There are many more games we’d like to try out, but we’ll leave them for a next post so we can have this one up before Christmas! 🙂

Clio: This game has you race around the world in the trains and steam ships of the Victorian age, trying not only to make the trip in eighty days or less, but also outrace your fellow travelers. It’s really easy to get into the game: The rules are short and simple, the playtime is limited (less than 15 min per player) and it plays with two to six people. Be aware, however, that travelling was still an adventure back then – you might find only old and slow trains, get into a storm or be followed by a detective. It follow that the game is highly luck-based and a good or bad card draw can majorly impact your position. I recommend to take this with the stiff upper lip of the British gentleman, additionally enhancing your immersive experience. A special charm of Around the World in 80 Days is the direct competition with your book hero – can you finish the trip in a mere 77 days and make Phileas Fogg look like an amateur?

Naty: This game made me curse a lot! Which, you know, was fun. As Clio said, this is highly luck-based, so maybe you’re doing great in the beginning and you got your strategy down to the minute and then, BAM, someone gets a card that makes you give up your nice strategy cards. I enjoyed it a lot and while I wished it was a bit more strategy-based, the fact that luck plays a bigger role makes it easier to play. It’s definitely a game that if you’re not used to boardgames, it’s easy to get into. I have the worst memory for rules, but this was easy to remember, as there aren’t many. I loved the feeling of getting into the game and remembering the book, and the adventures Phileas went through. Fun game!

Clio: You try to make matches between your characters and those of the other players, gaining prestige depending on how well the wishes of your characters are satisfied with their matches. This game truly derives its charms from the literary immersion. Oh, the wondrous opportunity to have Elizabeth Bennet and Mr Darcy marry – because you set them up! Or, alternatively, you can mix up things and create daring new matches, even cross-novel – Mr Bingley and Marianne Dashwood, anyone? Mechanism-wise, the game is a merry flurry of marriages when playing with more than two people (because both players involved in a match gain from it) and possibly a lot of passive-aggressive declining of matches in two-player games. If that should happen, remember Emma Woodhouse’s wise words: “If a woman doubts as to whether she should accept a man or not, she certainly should refuse him.”

Naty: This is a very fun game, and I don’t think the rules take more than a few minutes to explain. All characters are from Jane Austen’s stories, which makes it so much fun!! This is a small and light game with only cards to play, so it’s easy to carry to your BFF’s house so you both can make a tea party out of it and laugh over the crazy matches you make! This is probably better with 3-4 players, but we played in 2 and it worked very well! Except when Clio was petty and decline my marriage offers, that is. This is fun and immersive, quick and easy, and I loved it!

Also, this second chapter is supposed to be MUCH better than the first one – hence why we recommend it.

Bring Your Own Book

Naty: This game is simple: you select a few books and draw a card with two themes. One of the players chooses the theme and everyone has 60 seconds to find a sentence in the book they selected that fits the category! The rules change a little depending if you’re playing with 2 people or more. The great thing is that you can try for free on the website, and they are soon going to have it as an app as well, which is very practical. It’s actually a very fun game, and we’ve tried using books we knew and books we haven’t read and it was fun to play either way! This game is very quick and is so adaptable, and you can play with two people as a collaborative game. This is a great game and I enjoyed it so much and it’s a staple now in evenings when I don’t know what to do!

Clio: This is less of a board game and more of a book game. Works with every player count and for any amount of time you want to play this, which makes it a perfect game for kicking off your game day when not all attendants have arrived yet as well as for quick little gaming session on a weekday when you’re pressed for time. You can easily tailor the game to a theme by picking specific prompt card (there are a few pre-made sets online) or books of a certain genre/series/whatever. From my experience with it, a wild free-for-all works wonderfully fine, however – and it can be even more fun to try to find “Something written in a teenager’s” diary in a sober, philosophical sci-fi-book.

Naty: We played this game at the game fair in Stuttgart, and from starting to learn the rules to finish the game, less than 45 minutes had passed. The rules were simple and easy to remember (even for me) and I really liked the King Arthur theme! The idea is that, after King Arthur dies, you and the other players try to gather influence on the different parts of Britain, and you must not let the Saxons win. I really enjoyed the tactics part of the game and trying to get ahead of my partner in gathering influence.

Clio: I love how this game generates tough tactical decisions out of simple rules. To strengthen your influence with any one faction, you must weaken their position on the board – which might leave you the leader of a losing faction. The theme is a bit superficial – indeed, the game is a re-implementation of King of Siam by the same designer, so apparently power struggles work the same in early medieval Britain as in 19th century Thailand. You won’t get a strongly Arthurian experience with this game, but surely a mechanically elegant and engaging board game.

Naty: If you’re not quite into boardgaming, I would recommend starting with something that is shorter and simpler than this. It is a game that can be very long and with many rules. So far I have only played the dark side, who has less rules to memorize and has a more straight-forward approach: conquer Free People cities and/or corrupt the ring bearer (Frodo and Sam). And even this needs a bit of rule-refreshing every time I go play, and lots of free time – the first time I played it took 6 hours! Of course, as you learn the rules better and get better at strategy, it goes faster – last time I played it, it took 2,5 hours.

But the theme is awesome (ahhh the miniatures! THE MINIATURES ARE THE BEST, plus recruiting Nazgûl and Saruman makes you feel so evil, it’s delicious), playing is quite fun and quite ideal for two players. Personally, I found that playing with 2 people worked much better than with 3 or more, where you have to divide your armies with your partner and the dice, too… and discuss plans right in front of your enemies. I recommend this for you if you have patience to read rules and such, because it’s quite a lot of rules but it’s WORTH IT. I’m an impatient person by nature and this is the second boardgame I’ve played most so far.

Clio: Okay, I agree, this might not be the best game to start your board gaming life with. However, the strong theme and the beautiful visual design can be very attractive to newcomers as well as veterans. I know at least one person who started board gaming with this game (after the usual CV of playing Monopoly as a child and then not playing board games anymore afterwards). The basic rules are quickly taught, and the gameplay is rather straightforward (move armies, conquer places as the Shadow, move the fellowship, try not die too soon as the Free Peoples). It just requires one player to work through the rulebook and be aware of all the fiddly little rules (but hey, reading should be your strong suit, amirite, bookworms?).

For the effort you put into that, you get unparalleled epicness when you save the besieged Minas Tirith with a desperate attack or slam-dunk the Ring into Mount Doom (or, if you are more evilly inclined, when you conquer the Shire and make Frodo succumb to your power), and I promise you, every individual game will have moments like that galore. Lastly, while I admit this is no short game, let me put it into perspective: Watching the Lord of the Ring movies (´takes nine hours (or twelve hours if you go for the extended editions), reading the 1200+ pages of small print that the books are takes probably even longer (if you are not some hardcore speed reader). The board game typically clocks in at three to four hours and is therefore the most accessible rendering of the full trilogy.

Do you guys like playing board games? Do you have suggestions of what we should play next? Clio and I will have a few tweets coming up this next week with polls and stuff 🙂

Clio has a cool blog about history, board games and sometimes live-tweets our games, and I swear we’re funny! *cof cof* Really.