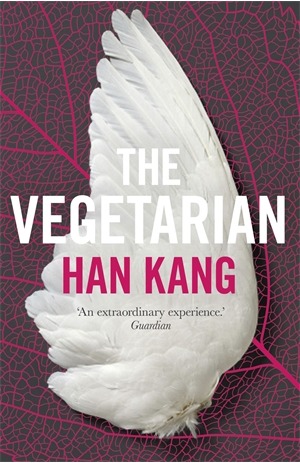 When I picked this book up, I expected a tale about a woman with mental illness, and how it affected her marriage and family – that is what I had read in the blurb. But The Vegetarian isn’t about that – it’s deeper and darker.

Yeong-hye is not exceptional in any way. She’s quiet, obedient, not specially pretty, and moves along her day being a dutiful wife. The novel being with the husband’s point of view, who is the first to witness Yeong-hye’s mental state deteriorating. It starts with a dream. After that, she cannot eat meat anymore, nor eggs or milk. At first, her husband tries to persuade her to stop the madness as she throws away all the meat in the fridge, but she won’t be persuaded. This act is taken as shocking and shameful by her husband and family.

This isn’t a story about love-cures-it-all. It’s not about hope. It’s about people, shame, burdens and how easily we crumble into violence and abuse if given a chance. How we let it happen. The writing is disturbing, and evokes the creepy feeling of the novel. The Vegetarian is strange and unique, I’ve never read anything like it.

The first part, told through the husband’s point of view, was the most gripping one to me. After that it feels that the novel lost pace, but was nonetheless very intriguing. The second part is told by her brother-in-law, who is an artist and starts obsessing about her and having sexual fantasies. The third by her sister, who has always been taking too much burden on herself and now must deal with her ill sister, too. I wish the ending had been told in a clearer way, the book is so full of allegories that it’s easy to get a bit lost in them.

This book is under 200 pages long, but will stay in your mind long after you’ve finished it. The story of Yeong-hye is disturbing, strange and will maybe even make you wish the protagonist would just die.

6 thoughts on “Review: The Vegetarian, by Han Kang”