So this last weekend had 4 days because of a holiday plus bridge day in Germany, and I used the opportunity to be constantly fed coffee by my boyfriend while reading The Raven Cycle series. Really, I don’t think I’d drunk this much coffee in such a short time in months!

This is the fantasy YA series I cannot stop hearing about and a lot of people whose tastes in books are very similar to mine simply adore it, so I knew I had to read it immediately to see what the hype was about!

(strong image below for those who hate cracked spines)

First of all, I’d like to say that all these books looked to be about 300 pages long, but somehow they were all around 430 pages long, which is WITCHCRAFT and messed up my careful planning of how much time I’d need for each. Meaning I got nothing else done in the weekend but reading. I’m glad there was no need to go to the supermarket, otherwise I’d have starved.

The beginning was very, very slow burn, introducing the characters a little too much. I love that Blue has a family of psychics, all the scenes at her place were amazing and I loved how energetic and vibrant it was described – also, I love Maura and Calla! Blue herself felt a little bit special snowflakey, meaning she tried hard (as she says herself) to be eccentric, when in fact she is sensible and non-psychic. It felt like her eccentricity was a bit forced, but I loved her no-nonsense personality!

The raven boys themselves got a bit under my skin – they’re all low-key sexist. I have to confess I didn’t like Ronan and Gansey a whole lot in this book, and I absolutely loved Adam. This book gave hints of an upcoming love triangle, which I don’t appreciate. Gansey is such a spoiled boy and I crinkled my nose at his lack of sensibility. Also I understand Ronan is broken and in pain and all, but he is unnecessarily rude and not in a cute way (the baby bird is so cute, though!). I didn’t really have many feelings for Noah, though.

This was the book, however, where I started to suspect Stiefvater’s writing wasn’t for me. I could just feel the presence of the narrator too much and, in my opinion, narrating is supposed to be basically invisible. Also she must have said 300 Fox Way a thousand times.

I loved the magic in it, the book itself felt so magical with a touch of whimsical.

The ending, though! So fantastic! It was such a 5-star ending, but if it wasn’t for that it’d probably be a 3-star book. So I gave it 4 stars, but I really felt like the pacing was very different from one part of the story to the next. The ending left me wanting more, so I was very happy that I’d planned to binge-read the series already!

This book confirmed that the writing style is not for me. I was constantly pausing my reading because the sentence structure distracted me. I love how she constructs the plot with such intricacy, but I am not sure I will be reading more books from her after this series. This one had the same issue of the previous book, with a slow beginning and middle and then it picks up pace on the last pages of the book.

I really liked Gansey and Ronan so much more in this book! I wasn’t completely happy about how Adam had so many anger issues, but it was understandable. If I were Blue, I would have been very scared. I also still don’t get her crush on Gansey.

The plot, once you get through the parts where it’s very slow, was so interesting! It must be absolutely terrifying to get chased and killed over and over in your nightmares and wake up knowing it might be come true. This book is basically Ronan’s arc, I loved getting to know him better and it broke my heart.

I had mixed feelings about Maura and the Gray Man, specially by how quickly it developed. But then I warmed to it – he’s actually such an interesting character and, while the romance still isn’t too convincing for me, I love how they interact and how Mr. Gray is such a good friend/father figure to Blue.

I disliked so much how much Latin there was. It just felt very presumptuous to me.

I don’t love it when endings are cliffhangers, which seems to be the thing with this series. But as I had the other books, it wasn’t a big deal. 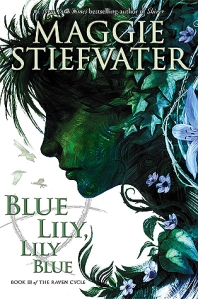 It totally irks me that there are 2 books with blue covers in the series and the one called “Blue Lily, Lily Blue” isn’t one of them.

Colin Greenmantle was a rather underwhelming villain, in my opinion. From all we got to know about him in book 2, I expected him to act a lot more dangerous, but most of the time he was just an overconfident brat. His wife Piper was a much more interesting character and together they were quite an interesting couple!

Page 52 of #bluelilylilyblue Goddammit Malory irritates me so much

Artemus is… interesting. By this book I didn’t have much of an idea about him, but he did upset me quite a lot. He’s just so useless! Also Jesse Dittley was so LOVELY and I love him so much.

One thing I really like from this series is how you can see the character growth and follow the characters as they learn more about each other and themselves.

There were MANY questions this book had to answer, so I expected revelations upon revelations! For example, I was upset that Blue Lily Lily Blue didn’t SAY the damn verdict of the trial! And The Raven King took its time to tell us. This was such a hurtful topic for Adam, I wish the result would’ve been discussed in the previous book already, together with its emotional implications.

So, big yes for Adam and Ronan being openly a thing, I love them together so, so much!! Adam deserves someone who loves him, and Ronan certainly deserves to have someone who can make him softer and less angry. I ship them so much!

#theravenking omg adam and ronan just had a moment!!! 😍😍😍😍😍😍😍 pic.twitter.com/p2uvXaShxg

I loved Piper and her demon, and how unapologetically careless and evil she was. It was so funny! But I also wish the auction had been a bigger thing, with more people, maybe the demon creating chaos, bringing nightmare creatures upon the crowd… no?

The plot felt a little everywhere, and the way they actually manage to find the Raven King was so… underwhelming. Actually, the whole Raven King part of this book was underwhelming. It felt too simplistic for me and not enough of an emotional punch.

Hum, I got the feeling that Henry just kind of got thrown in the story? He showed up to just literally save everyone and be immediately included in the group and I was not really here for that. While I am glad that FINALLY we get a POC in the group, he was just put in the middle of the mess, was pretty okay with the whole thing and did not even hesitate about it. Also he made a rape joke, which didn’t sit well with me, so I refused to like him.

There was so much happening in this book, and sometimes nothing at all. I finished it with questions! So many questions. I’ll address them below so that I avoid giving spoilers.

All in all, I actually enjoyed this book a lot (despite my ranting)! I am still not sure which of the four is my favorite. I loved the magic system, the unwavering friendships, the reflection on privilege, the world building was also pretty amazing!

This series was a mixture of magic, creepiness, friendship, love, loyalty, personal growth and sprinkled with horror. It was very good!

Starting a #readathon this long weekend to read all the Raven Cycle books!

I'll be starting now with #TheRavenBoys and update you guys on my reactions 😁 pic.twitter.com/4Du2H3rj9G

Here are some links to the series if you’re interested!

Links that inspired me to read this series:

9 thoughts on “How my “The Raven Cycle” Readathon went!”