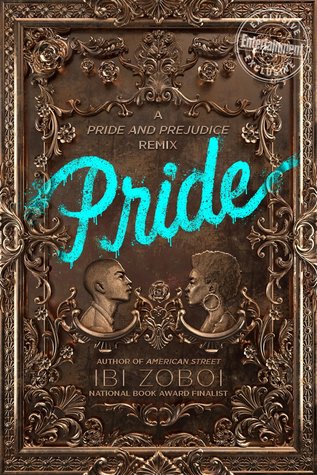 This was among my most anticipated books of 2018, a Pride and Prejudice retelling with gentrification, black main characters, and this gorgeous, gorgeous cover.

Pride tells the story of Zuri Benitez,who grew up in Bushwick and wants to stop the rapidly gentrification of her neighborhood. When a rich black family moves into the big house across her street, she does not expect to like them; in fact, the younger son, tall and brooding Darius, is quite insufferable. Still, she finds herself asking if what she feels for him is really hate.

I will start by saying that maybe my expectations here too high, and maybe from not knowing Ibi Zoboi’s other work, I had come too blind into the book. While having its merits (I will describe them below), in the end I was disappointed by the book. What I love most about Jane Austen’s work, and Pride and Prejudice especially, is how she has a critical, social undertone to her romances. She points out hypocrisy and slanders characters while using beautiful prose. Pride felt like it took the plot of the original story and turned it into a checklist (several sisters? Check. Brooding, rich love interest? Big misunderstanding? Cousin who’s an ass and will inherit the house and ends up with someone who’s not one of the five girls? Check. Check. Check.). I don’t understand the point of having kept some of the aspects of Jane Austen’s story for the sake of mirroring it. It added pages, but did not enrich the plot.

I did not buy into the romance. Zuri was not just argumentative, she actively annoyed me in the way she talked to Darius, and I didn’t like Darius either. Being rich and handsome does not make up for him being completely spineless. The whole point of Mr. Darcy’s appeal is that he is a man of strong principle who will do anything to protect his loved ones. All Darius did was gossip a little.

I was also quite annoyed by her family. I know they are supposed to be loud and a bit embarrassing, as was in the original story, but gosh. Mary was turned into a money-hungry girl who thinks herself a financial expert, but felt far more like a gold digger. All of them did. It was so annoying watching them interact.

What I did like about the book is the unflinching social commentary. This book is about gentrification, identity, culture, and it does not shy away from pointing out privilege where it sees it. But it didn’t quite feel seamlessly woven into the story like Austen did. In fact, it’s put to the foreground of the story, side by side with the romance. I’m not sure I like that, but I don’t think the theme would have worked with a more subtle approach. Zuri has agency, has strong opinions and is a modern woman. It makes sense that she would be more openly discussing those things and actively trying to change them, instead of the quiet, witty reproach of Austen. So I thought it was interesting.