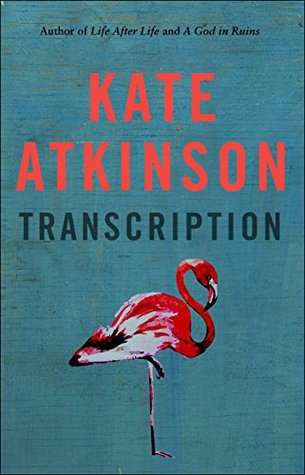 In Transcription, Juliet Armstrong is recruited to join MI5. The year is 1940 and the war has just begun – she believes she can make a difference with her work, and finds the reality of her job alternatively boring and terrifyingly exciting. In 1950, Juliet is a different woman – she works at BBC and has a rather dull life. One day, she sees someone from her past. Little by little, all the people she used to know from her obscure work during the war seem to reappear, and something dark she thought she left behind is coming back to haunt her and make her pay.

I loved this book so much. Juliet is such a witty, funny character who constantly gets underestimated. She’s a talented liar and finds herself a quite accomplished spy as well, whether she wants to or not. Reading about her time as a typist and a spy during World War II was so interesting! The pacing of this novel is fast and it reads almost in a light-hearted way. For people who would like a historical fiction without the sobbing (especially rare for a WWII book), this is it.

After the rather mediocre rating  (3.56 on Goodreads, as per writing of this post), I was so positively surprised! This is charming, fun and  surprisingly applicable for the current times, when fascism and anti-Semitism seem to be on the rise. This novel is great on highlighting how perfectly ordinary people can still have morals completely distorted by hate.

Fans of The Guernsey Literary and Potato Peel Pie Society will probably enjoy this one. Also people looking for historical fiction with no romance plot and rather upbeat. While not always so, the tone of the novel is quite light throughout. I highly recommend this book, and it will certainly be a favorite this year!

The dark twist the story keeps alluding to was actually a bit of a letdown to me. That someone (a woman) would die was strongly hinted at since the beginning, and the actual event was underwhelming, perhaps because the building up to it had made my expectations high.  I did deduct a star from my rating because of that, but otherwise the book is a full 5 stars to me. The actual dark twist to me was Juliet working (albeit against her wishes) to the communists in the end! That was shocking. I also wish that there had been more espionage chapters, I loved seeing her work as a typist, but her as a spy was so awesome.