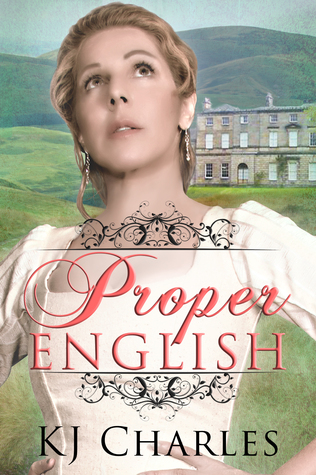 Proper English is the story of Pat, a sensible young woman, who’s going to the country house of Earl of Witton for a shooting party. She’s also meeting her old friend, Jimmy, and his new fiancée. The problem? It might just be worst party of all time, as tensions grow and secrets are spilled out, revealing shocking betrayals, and worse – they’re all stuck together through a storm that might last several days. And Pat has yet another problem: Jimmy’s fiancée, Fen, is a lovely, beautiful girl, and Pat has never met someone quite like her. When a body is discovered in the house, Pat and Fen must do what they can do find the murderer.

This is such a lovely book. Patricia (Pat) is a headstrong, no-nonsense kind of woman who loves to shoot and just tells it like it is. I thought initially they would play the I’m Not Like Other Girls card with her, which they did, but I actually loved her character and don’t think this was overused. She is very supportive of other women and a bit socially clumsy but generally just a steadfast, loyal friend. Fen is a “frilly”, girly young woman, absolutely beautiful and curvy who turns heads wherever she passes but never is acknowledged by others for her intelligence. She wears her “silly, giggling girl” façade as a defense mechanism, but she’s determined, strong and sweet. I loved them together. Such a sweet couple.

Also, if you don’t like it when F/F books have too much of a slowburn, this book definitely does not do that. In fact, the majority of the book is dedicated to the two women falling in love and the murder doesn’t even happen until the second half. This is definitely a cozy mystery kind of book, to bring a smile to your face while you read. I particularly liked the dialogue, it was so witty and funny and highly quotable. I was really happy to have picked it up!

The setting and style of murder gave me a feel of an Agatha Christie mystery, with the ornamental knife as a weapon and all the scandalous secrets the guests at Rodington Court try, and fail, to keep. But don’t go into this hoping for an Agatha Christie-like whodunit, there is no murder until the second half of the book.

If you love witty characters and want to read a historical romance where a F/F couple can actually have a cute story, this is a great choice.