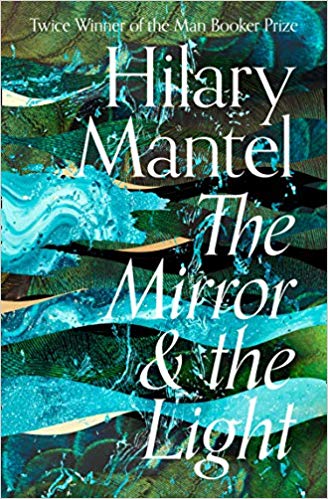 The Mirror and the Light is the third and final installment of the Cromwell series, which has had my whole heart since I started it a few years ago. It tells the story of Thomas Cromwell, his ascension into power and trust of King Henry VIII. In this last installment, we have seen Anne Boleyn fall from the king’s graces and lose her head – and although Cromwell has more power and wealth than ever, his enemies are gathering to plot his fall.

This trilogy takes a long time to read, not only because it’s nearly 900 pages, but also because of the sheer amount of characters, plots, subplots and the amount of attention the reader has to pay to details (absolutely worth it). It’s a series to get immersed into, and I loved spending around two weeks reading this – it’s one of my favorite series of all times, of all genres I read. Mantel turns Cromwell into a character so full of life, complexity, sharp wit, intelligence and ambition it’s truly refreshing to cheer for someone who is clearly not the classical hero in historical fiction stories. I’ve read a few Tudor books, and none have the brilliance of this series.

Comparably to the other two, as far as I remember since it’s been a few years since I last read them, The Mirror and the Light felt not as high stakes as Bring Up the Bodies, perhaps because the main antagonist isn’t Anne Boleyn anymore, who will forever be one of my favorite characters. This meant that I was not as invested in the story as with the second book, but still – The Mirror and the Light wavered between 4 and 5 stars to me quite consistently. Her writing is so powerful – there is enough detail that you easily lose yourself in the world of sixteenth century England, but it doesn’t feel like it’s so much that it bores the reader. To me, the book was a bit too long and I could have easily done without the scenes with Jenneke, in fact, without her character at all.

I loved the portrayal of Jane Seymour – which was a big surprise to me, as she had so little nuance in Bring Up the Bodies. Really, the women in this series are the highlight of it, for me – their own scheming and plotting, smiling sweetly as they lie through their teeth, saying the most scandalous things, or carrying the body of a headless queen. Mantel portrays them with such life, I adore them all. I suppose that’s also something I loved in Bring Up the Bodies more, how much more central to the story they were. The third book, following Cromwell’s last years before he fell from grace had the women a bit less on the spotlight. Which, of course, is fine – it’s a historical fiction after all, the politicians and religious figures are men, and the people Cromwell works with are mostly men, but I do love it when the women are part of the main plot.

Despite my complaints above, I actually loved this very much – the flawed characters, unapologetically ambitious, smiling as they plot each other’s fall, and so much betrayal. I for one will never trust anyone ever again. This series is a story of epic proportions, with the gorgeous writing and a level of research and detail that leave me in awe of Mantel, every time. It’s also surprisingly funny, and so touching. Her portrayal of Thomas Cromwell is unforgettable. I don’t think any other historical fiction series compares.

I highly recommend the Cromwell trilogy, and I desperately want to re-read the first two books!

11 thoughts on “Review: The Mirror and the Light, by Hilary Mantel”